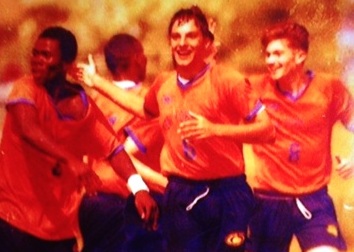 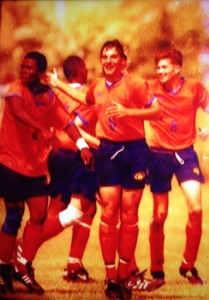 As a child,   Salvatore Conigliaro (Toto) flew away from his beloved Shangri-la of Terrasini, Sicily whose colorful shoreline he’d miss. In that paradiso, waves splashed and hummed under the unseen direction of an invisible oceanside orchestra leader. Toto settled in New York where cold steel parapets, and a bustling busy city choked with depressing charcoal clouds, surrounded the boy.

At the time of his move, the twelve year-old Salvatore idolized Italian footballer (soccer star), Roberto Baggio and patterned his steps and style after him.  Toto, a child prodigy on the soccer field for Coach Renzo LoPiccolo’s Scuola di Calcio, was on his way to making a name for himself as an Italian footballer.

Eventually, Salvatore Conigliaro became a naturalized American and played competitive soccer in New York’s public schools. Numerous scholarship offers stuffed and choked his mail slot. The letters from the college coaches piled up like stacks of boxes after a pizza party. All Conigliaro needed to do was select the college of his choice.

That never happened. As a Sicilian, brimming with simpatico and honor coursing his veins, family hardships forced him off collegiate fields. The time came for him to help out his family. After his parents’ divorce, Sal took on the responsibility of supporting his mother and his younger siblings. He passed up university education and collegiate sports. Instead, he put on his overalls and boots, and then trudged into the world of work.

Unlike most of us, he never looked back, never reached for the negative like Marlin Brando in the movie On the Waterfront when he lamented, “I coulda been a contender.”  Instead, Sal remained upbeat and positive, feeling contented and satisfied with helping his family. His heart leaped with each of his younger brother’s scholarship soccer offers, and indeed by the successes of all of his younger siblings. When he talks about those days, he props his head up and proudly says, “I’d make that same decision today. Life is all about family, and that represented my foremost priority.”

While working to support his family, the Brooklyn Italians selected Sal to play on their semi-professional team. He beamed as he reminisced about his early days as a professional footballer in Brooklyn. As we stood chatting in the stands of a prestigious school, watching a girls’ high school championship game unfold before us, he reflected on the excitement and joy of playing on that team. I could see that he intended to pass his winning attitude and multiplicity of skills onto his team of young women who stood, warming up on the apron of the field right below us. They stretched and patiently moved with the unison of a U.S. Marine Corps drill squad as they awaited their game-time buzzer. Behind darting eyes, these talented, teen-aged players excitedly anticipated their performance, replete with dreams of athletic glory. 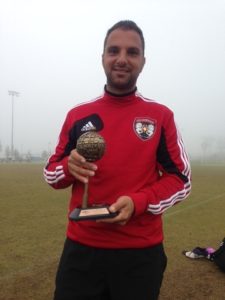 We parted. Conigliaro marched toward his elite woman’s team at double speed. Determined, he meant business. I thought about the first time word of this young, innovative, and dynamic coach reached me. When I heard that we shared Sicilian roots, I knew that I needed to chat, perhaps interview this man. On the telephone, I said to Salvatore, “Faccemo quattro chiacchiere.” He immediately agreed to meet with me.

In retrospect, from the moment we met, I felt at ease.  It seemed as if I’d known him my entire life. I’d experienced the same thoughts on my first visit to Sicily, where nearly every face I saw reminded me of the residents of the transplanted Sicilian community thriving in the Brooklyn of my youth. We were all members of that same (sangu) bloodline. Salvatore looked like a branch of my Sicilian family, except that he was now the young one, and an accumulation of annual rings tattooed my body.

Conigliaro mentioned that Disney’s Wide World of Sports extended AS Roma an invitation to train on its grounds.  Sal managed to arrange for his girls team, Fc America to meet these professionals. Established in 1927, AS Roma is one of Europe’s most prominent football (soccer) clubs. The awe stricken young women with dropped jaws performing on Salvatore’s squad met Roma’s stars such as Daniele DeRossi, Francesco Totti, and Michael Bradley. Conigliaro told me about my girl with the melting brown eyes that I’d cherished for nearly a decade and a half.  Yes, he mentioned my fourteen year-old granddaughter Marianna Shurina’s ability to turn heads because of her superior soccer skills, even when sharing the field with the professionals. He then scheduled for his girls team to practice with that Italian powerhouse squad.  Sal’s eyes widened, he looked at me with raised brow and said, “Do you realize that in practice Marianna scored off their top goalie?”  I joked, “Forget all her other proud heritages, that was a purely Sicilian shot.”

What exactly did he hope to bring to U.S. soccer, I wondered? Conigliaro simply said, “I want to develop youngsters and infuse them with professionalism. I also dream of seeing them playing in college. It’s never been about me.  It’s all about helping youngsters.” 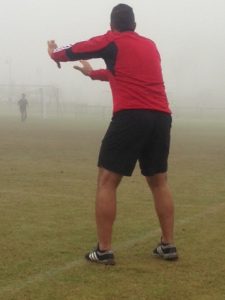 When I changed the subject and asked for his assessment of men’s soccer in the United States, he paused for a few seconds,  fixed his eyes on the velveteen skies above and suggested that the American men’s game improved significantly since 1996.  Part of its enhancement resulted from professional soccer squads building smaller stadia (25,000 seats), thus filling the stands more easily and promoting enthusiasm.  He added, “Better players are drawn to the money trail. Until America is willing to pay more money, better players will not line up to play here. Famous footballers from other countries are usually near the end of their careers and just play for fun when arriving here.”

Rushed by game time’s approach, I quickly revisited his thoughts on the quality of America’s women soccer.  “American women’s soccer,” he stated unequivocally, “is the best in the world, at all age divisions.”

As noted in many of my Times of Sicily articles, once again, Sicily has generously exported part of its human treasure to enhance other lands. Conigliaro permanently strayed from the earthly paradise of Terrasini to impart his knowledge and talents to young women in his adopted homeland.