The Value of Community

“Vittorio De Seta? Don’t you mean De Sica?” If you hear this all too common observation, you can be sure that the speaker isn’t a movie fan. Or that he or she is a film fan with a serious gap in knowledge relating to documentary cinema. Because, without denying the unquestionable genius of the author of Ladri di biciclette and Matrimonio all’Italiana, the other great Vittorio of Italian celluloid was De Seta, born in Palermo and educated in Rome as an architect. He found his calling in the fifties as one of the great documentary makers of his time, even from the outset, when he debuted back in 1955 with the short, Vinni lu tempu de li pisci spata.

Praised by Martin Scorsese himself as “an anthropologist with the voice of a poet”, the director has traditionally been considered an observer of man in the face of nature: fishermen, farm labourers, shepherds, miners. There has never been a lack of people pointing out that part of his worth lay in the filming of occupations in danger of extinction, although that wouldn’t have been considered back then. 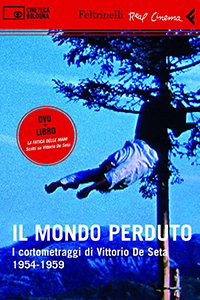 It is difficult to believe that ways of life, which have developed over hundreds, even thousands of years in the same manner, could have come to an end. The Italian economic miracle and the steamroller of development gained ground every day, extending out from the great capitals towards every corner of the country. Yet, De Seta, by sheer intuition, was quicker, and in his native Sicily, in Sardinia, in Calabria, he managed to film an entire world on the verge of disappearing.

With the release of his complete series of short documentaries (1954-1959) by Feltrinelli, under the eloquent collective title of Il mondo perduto (The Lost World) – a series that has been suitably restored by Cineteca in Bologna – they have not only done justice to this great film maker, but they have also invited us to reflect on a bygone world; to contrast it with the one we share today, to see how the way our lives have evolved, and not always for the better. Leaving each viewer to draw his or her own conclusions, I will venture to mention one that I find startling: being shown the prodigious power of the volcano on Stromboli (Isola di fuoco), the inhuman working conditions in the sulphur mines (Sulfarara) or in the wheat fields (Parabola d’oro), the island’s religious festivals (Pasqua in Sicilia) or the daily life of Sardinian shepherds (Pastori di Orgosolo), what always stands out in De Seta’s vision, whether consciously or not, is the value of the collective.

It is surprising to think how much individualism has been established in contemporary society, when our not so remote ancestors, the grandparents who were witness to the arrival of electric light and running water, couldn’t have conceived of life without the presence and help of their neighbours. In order to drag a trunk that would later serve as a greasy pole, to take the silvered tuna from the sea, to care for the children and to knead the bread, in order to laugh and to cry, the other was always an essential element. To see De Seta’s documentaries all together is to behold a touching monument to that forgotten thing we call community. Certain critics have attempted to see something of that in the Pasolini who spoke of “sviluppo senza progresso”, in other words, development without progress.

The DVD is accompanied by a book, entitled La fatica delle mani (The Tired Hands), with texts by Roberto Saviano, Goffredo Fofi, Alberto Farassino, Vincenzo Consolo, Gian Luca Farinelli and the quoted, Martin Scorsese. In its pages, among his many other mentioned attributes, there is an assertion of the film maker’s obsession for truth, his search for the essence above appearance, and of the freshness and innovation of his style given the era.

However, there is no doubt they will discover more, in light of these new times we live in. Maybe one day, when someone refers to Vittorio De Sica, a movie fan will come forward and say: “Don’t you mean De Seta…”

A translation of Alejandro Luque’s work, The Sicilian Defence, has just been published by Kadalu. It consists of 8 stories with Sicilian themes – a window on contemporary Sicilian life seen through the lens of the island’s literary history. It is available worldwide, here is a link to his work on Amazon US. Click the cover: 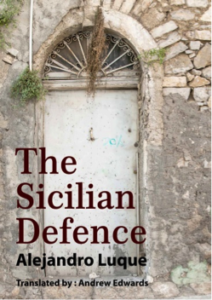