Views from the ‘Triangle’ and the ‘Continent’ 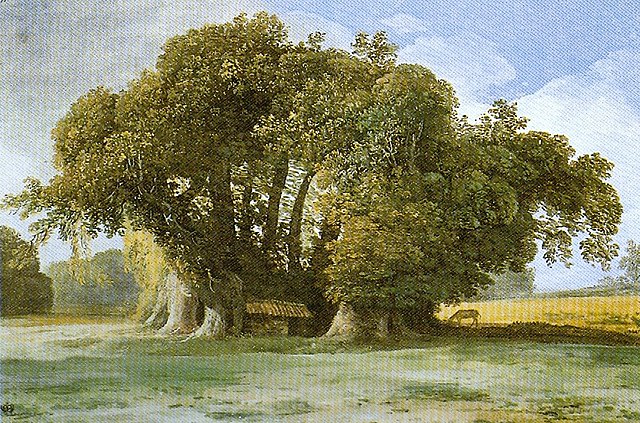 We’ve always been interested in travelogues and guides from another era as they speak, not only of the culture they focus upon, but also of the ideas, preoccupations and, sometimes, prejudices of the authors’ own culture. We are currently writing a book on the poet, Samuel Taylor Coleridge, and the time he spent in Sicily and Malta. As part of Coleridge’s own investigation and research, he read accounts of both islands by learned men from Britain and, we have to say, the degree to which they pushed a colonialist agenda was an eye-opener. Perhaps this shouldn’t be surprising given the time, 1804, and the conflict with France which led to Bentinck’s intervention in Sicily. We also know that Coleridge was able to read Italian, which led us to dip into some accounts from Italians who had travelled across the island. We thought it would be interesting to translate some passages from a range of peninsula writers from the end of the eighteenth century onwards and from islanders writing for a wider public. Just what did the ‘polentoni’, Napolitani and others make of Sicily? What did the Sicilians wish to project to a larger Italian audience? We have put our own, somewhat tongue in cheek, impressions in Italics under each quote.

In Sicily, whether in the small or larger towns, the courtesies extended to the traveller aren’t accompanied by those clumsy concerns that make them less agreeable; but rather by good grace, discretion and a certain freedom given to the guest, which make them very welcome.
Ricordi di un viaggio a Napoli e in Sicilia (Francesco Finocchietti, 1864). We agree totally with this one. Natural hospitality is always better than the forced variety. 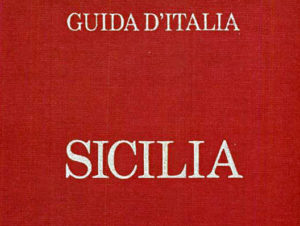 The preparations to receive King Vittorio in Palermo… despite the bad taste, they were solemn and grandiose. It was said that he would really arrive on the 27th (November). What a sight Toledo (note: now Via Vittorio Emanuele) was on that day, with decorations, an immense multitude, the universal brio, so much so that it can only be imagined by those who know the people of Sicily.
Del festeggiato viaggio de’ reali d’Italia in Sicilia (Antonio Traina, 1881). This is full-on propaganda tinged with a bit of northern Italian sangfroid – i.e. oh those colourful southerners with their bad taste!

The perpetual disputes among the learned over determining the position of the ancient cities and castles of Sicily makes travel over this large island for the man of letters rough and annoying, given the impracticable roads, the torrents, the precipitous ravines…
Viaggio della Sicilia (Carlo Castone, Conte Della Torre di Rezzonico, 1828). Plus ça change for this one. Academics will always squabble about the minutiae of a subject and anyone who has driven the backroads of Sicily today will know they are a bit hairy and prone to the vagaries of weather extremes.

Not far from the city (Enna), you can see the famous lake, where poets, especially Claudio, say that Proserpina was kidnapped. In the mountains belonging to the city, you will find the Salgemma mines, the richest in Sicily, but now in a total state of abandon, so much so that you won’t encounter anyone who wants to risk entering the mountain, as the art of building supports has been forgotten.
Guida dei viaggiatori in Italia e all’Isole di Sicilia (Domenico Sambalino, 1823). Greek myths and legends are inextricably linked with Sicily. They were obsessed with them then and we still are today. Nothing wrong with that! As regards the mine works, well they’re always getting abandoned through economics, geography or the exhaustion of resources – take a look at Cornwall.

On the contrary, Sicilian is distinguished by sweetness and grace. It is notably mixed with Arabic, and also conserves vestiges, more or less noticeably, of all the occupiers who have followed one another, such as the Greeks, Carthaginians, Romans, Byzantines, Saracens, Normans, Germans, French and Spanish.
Guida storico-statistica monumentale dell’Italia e delle isole di Sicilia (Ferdinando Artaria Ed., 1857). This is nice to see. An appreciation of Sicilian as a multi-faceted language collecting influences from various sources. Having it characterized by ‘sweetness and grace’ is a pleasant change from the more common characterization as a peasant dialect. Even Coleridge complained of ‘bad Italian’, which we suspect was a misunderstanding as he most likely didn’t realise he was listening to Sicilian.

Castrogiovanni (Enna) presents a mixture of roads and paths winding through the rocks; the houses are located in the seemingly most inaccessible places, whether at the bottom of picturesque funnel-shaped clefts or above the mountain’s rocks, stretched like frames over deep precipices.
Guida manuale pel viaggiatore in Italia (Edoardo Sonzogno Ed., 1870). A good bit of standard guide book description here, although one wonders if the writer had visited Sicily that often, given this description could stand for the majority of inland hill villages and towns.

In truth a cave, the marvellous and surprising Ear of Dionysius is known for the phenomenon of its echo. In a corner of the Latomie, referred to as Paradise, you will find the opening to this very high and twisted cavern carved out by picks, which, given the material is well preserved, forms the actual shape of an ear cavity… Mirabella, Bonanni and other modern writers assert that the tyrant Dionysius had this horrible prison constructed, and that the grotto resonates in a such a manner so that, from the heights, everything being said by the incarcerated unfortunates could be heard.
Viaggio per tutte le antichità della Sicilia (Ignazio Paternò Castello, 1817). Well, you can’t go to Neapolis in Syracuse and not talk about the Ear of Dionysius. Even then there was debate about the veracity of Dionysius’ echo chamber being used as an eavesdropping station – still, it makes a good story! 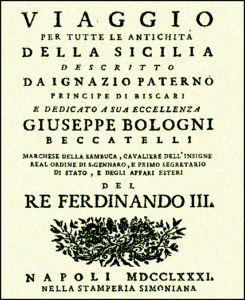 Noto is a city newly rebuilt in a better spot, and a few miles from the old one, ruined by the 1693 earthquake. The Ispica valley is found in its south-westerly territory, making the abundant mineral springs pleasant and picturesque; there is a rock of such size that it’s carved into a thousand square little cavities, arranged in various sizes. The fatigue of many miles of disastrous road can be saved; perhaps they can be seen in greater number at Pantalica.
Guida dei viaggiatori agli oggetti più interessanti a vedersi in Sicilia (Abbot Francesco Ferrara). Noto, one of the glories of Sicily and he’s more concerned about the surrounding countryside and the caves, which are lovely, but… He even suggests you can save yourself the trouble by visiting Pantalica! Maybe he thought Noto was just a ‘new town’, like Milton Keynes in the UK. Trust us, Noto is nothing like Milton Keynes. And yes, we do know the roads are bad.

After the sack of Rome in 1527, Polidoro Caldara da Caravaggio moved to Messina, where, in 1535, he was commissioned to make the apparatus and triumphal arches for the solemn entrance to the city of Emperor Charles V. He, along with his school, created all the paintings worthy of great praise. He executed many fresco works, which were mostly destroyed in the 1783 earthquake… Michelangelo Amerighi, o Morigi, da Caravaggio also came to Sicily, specifically Messina, Syracuse and Palermo. He was well-know and famous for the strangeness of his behaviour and also for the strange way in which he painted.
Guida del viaggiatore in Sicilia (Father Salvatore Lanza, 1859). No, not that Caravaggio, but the world-renowned Polidoro. Not intending to ‘diss’ the works of Signor Caldara da Caravaggio, but really…! Oh, the other Caravaggio, well, his works are just weird. Funny how tastes in art change and the great and good go in and out of fashion or, perhaps, it was because Salvatore Lanza was a priest. Caravaggio was notoriously antagonistic towards clerics. Also, we now commonly call him Merisi – see Andrew Graham Dixon.

We reposed at Agnone, and breakfasted in a beautiful wood of olives belonging to Prince Palagonia; and afterwards sauntering about through the neighbouring fields we entered a little cottage, where sat an old woman and the captain of a small coasting felucca from Messina, who was learnedly discussing certain doctrines of navigation, and displaying a world of self-importance… “What! Bobadils and pedants ‘even at Agnoni?’”
Giornale del viaggio fatto in Sicilia (Paolo Balsamo, 1811, N.B. translation not ours, but by Thomas W Vaughan). Two explanations here, either the aristocratic visitors were unsettled by seeing educated talk from a mere fisherman or they witnessed an early version of ‘mansplaining’.

But here comes the winter, a favourite season for clouds and mists. Although the mantle stretched over Erice’s mountain is monotonous and melancholy, it nonetheless provides a joy which is all its own. You believe, in such places, to be on the edge of that widowed northern location, of which ice and darkness are the everlasting masters, the two elements of death and chaos.
Erice oggi: Monte San Giuliano in Sicilia, memorie storiche (Giuseppe Castronovo, 1872). Blimey, Erice portrayed as Dante’s inferno. This could only be written by a Sicilian who has never traipsed around a Scottish castle in the height of summer whilst being lashed with sleet and soaked by fine misty rain. A nice piece of evocative writing, though.

What have we learnt? That anyone who dares to pontificate on something will be subject to the jibes of posterity. Which is exactly how it should be!

Andrew and Suzanne are authors of Ghosts of the Belle Époque, a history of Palermo’s Hotel delle Palme and Sicily: A Literary Guide for Travellers. The Times Literary Supplement had this to say about their literary guide: ‘Sicily is full of such delicious anecdotes: it is not only a literary signpost for travellers in an ancient island, but a cultural guide for anyone who finds themselves in the infuriating thrall of its contradictory and compelling extremes… Sicily is bound to become battered and dog-eared, blotched with caponata and wine stains’.

In addition, they are the authors of His Master’s Reflection, a travel biography in the footsteps of Lord Byron’s doctor and Andalucia: A Literary Guide for Travellers. Andrew is the translator of Agony, Sicily’s first detective procedural by Federico de Roberto and Borges in Sicily by Alejandro Luque, a travelogue in search of the photographic locations used by Ferdinando Scianna when he took images of the Argentinean writer, Jorge Luis Borges, during his island tour.