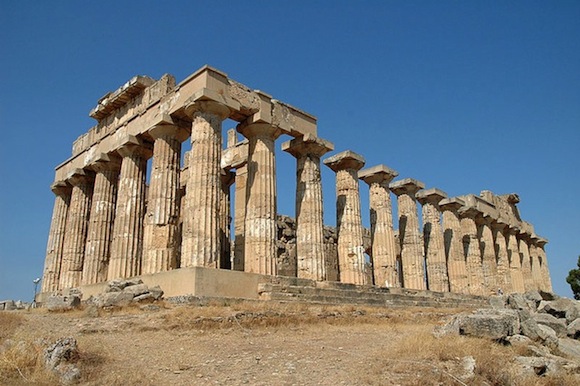 Clemente Marconi was sent to Selinunte when he was just 21 as a student. He has been returning ever since in his capacity as Professor in the History of Greek Art and Archaeology and Director, IFA Excavations at Selinunte. Selinunte is very evocative place, an important early Greek settlement perched above the crashing waves of the Mediterranean blue sea. So easy is it to imagine life there, but the layers of history left behind are dense. Prof. Marconi specializing in the Archaic and Classical periods, dedicates much of his life to piecing together, quite literally, the history of this place.

On February 8, at the invitation of Prof. Marconi, 7 scholars gathered at NYU. From Catania and Selinunte, Princeton, Stanford, University of Chicago and Zurich, they presented papers addressing different perspectives of analysis for what was this pivotal Greek city. Selinunte achieved such remarkable sophistication, that it eventually influenced Greece. Their research is fascinating and illuminating, stemming from the study of pottery fragments, coins, inscriptions, migration, temples; the evolution of their use and location in a social context, how tyranny defined and altered the cities based on found writings, and new thoughts about assimilation among the native Sikans and Elymians. There are countless ways to examine the layers of time buried in the sands.

The ultimate detectives, these distinguished historians and others have worked side by side to explain the historical and cultural course of events, the people that affected them and the context in which they occurred. A scholarly eye analyzes a potsherd no bigger than a cracker and can date it from the material, the coloring, the type of decoration or portrait, where it was found and what other items were around it. Thousands of remains are uncovered in this and other locations in Sicily. Digging anywhere on this island crossroads is bound to yield something. It is arduous, hard work, often times under a baking sun, but work that informs and adds to the worlds compendium of historical knowledge. I imagine it must be very satisfying.

I was recently in Motya, the first Phoenician settlement, well knowing that the famed Charioteer sculpture is presently on exhibit in Cleveland. That exhibit, “Sicily: Art and Invention between Greece and Rome” received rave reviews following some controversy getting it mounted. From Cleveland, in January it will travel to Palermo. Prof. Marconi contributed scholarship and editing to the accompanying catalog/book: Sicily: Art and Invention between Greece and Rome together with Claire L. Lyons and Michael Bennett. It is a singularly stunning overview of Greek history in Sicily during the time between 480 and 212 BC, described in essays by the most distinguished scholars in their fields of study. The photos are rich and beautiful; the art is spectacular, as much in its sophisticated rendering and degree of preservation as in its exquisiteness.

I salute the dedication and work of the people who help us understand from where we have evolved while enabling us to marvel at the abilities, ingenuity, style and priorities of past societies. This book has been added to my library. It is a wonderful source book for information and every page turn is filled with a treat for the eyes. It is available online, if you can’t make it to the exhibit.