Bitten Out of The Big Apple: Where has Little Italy gone? 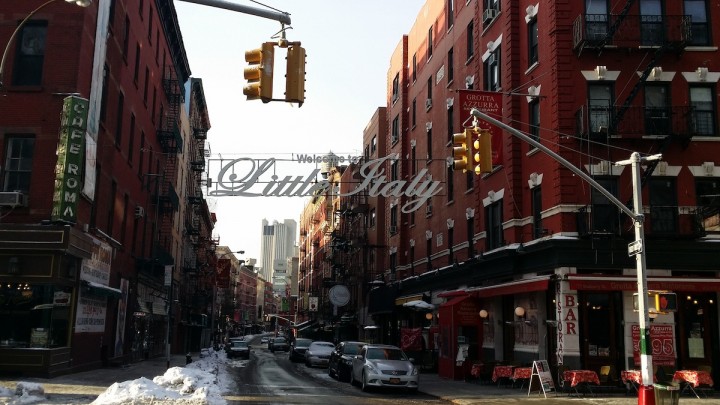 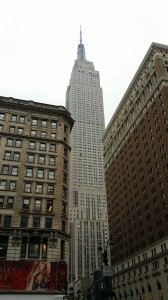 I have never missed participating in the “American Dream” but, as I happen to travel to the USA for my job quite often, I have planned a stop-over in New York in order to experience the Big Apple for a weekend. I have little time and the weather is miserable, but I decided that at least I have to go and see Ground Zero where the Twin Towers were, Little Italy, and the Empire State building. My little boy had wished me luck climbing all the stairs to the last floor of the Empire State Building, so I knew he would check that I had really climbed them when I got home!

It looks as if I’ve come late as always… and not only too late to see the Twin Towers. It happened when I first arrived in Paris, too, in 2007. People who had lived there for decades would say: “This is not Paris it used to be”. “Globalization and foreigners have ruined this city”. But this time was more personal: Little Italy is also part of Italian and Sicilian history. 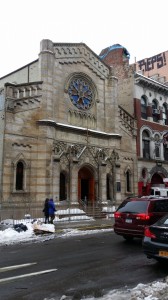 When I crossed the boundary of what was marked on the map as little Italy, I started looking around for “Italian signs”… It looked like China Town, but on the map it was definitely indicated as Little Italy. My excitement started to fade away as the feeling that “I was again late” started to take place. I suddenly saw a Christian sign: the Church of San Salvatore. It didn’t take a second more to prove my feeling was right: this was one of the few “monuments” remaining from the original Little Italy in a street full of Chinese adverts. A few meters on, another sign said: Italian American Museum.
“Well”, I thought, “it’s just history.. Little Italy is just history.”

I was imagining narrow streets teeming with children and Italian melodies… but I hardly even managed to find a cappuccino. Mulberry Street, what is actually left of Little Italy, is on its way to China too. An Italian face was actually there shoveling the snow that was whitening New York these days. I tried to be “Italian” and shouted from the other side of the street, like I would do in Palermo, “Are you Italian”? “Parli Italiano”? The man’s answer with a shy “un poco” – actually not much really. 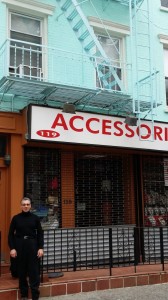 I asked the man, called John, where is the “center” of little Italy? He replied with a mix of sadness and resignation it was right there.
“This is my family shop, we have run it for three generations”, said John pointing at his yet undefeated tower, “and I will not sell up, but I reckon within twenty years from now it will all be over”. He said, it’s like the Roman Empire… it is all coming to an end.

He sadly showed me all the signs of “to rent” or “for sale”. He pointed to the old restaurant Giovanna’s – he said they just closed because Chinese has bought the property and they raised the rent to 30.000 dollars per month.

Before leaving him, I wanted to make sure to ask for the “treasure map”: where I could find a cappuccino and a brioche. Apart from everything else, I was hungry. Breakfast would be more like lunch for me since I was still in the UK time zone! 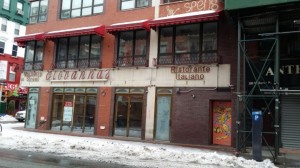 Brioche? Well, perhaps you wouldn’t even have found that back in the 1950’s, I was told. Most of the Italians in this area were from the South whereas in fact brioches are from the North. He told me that Mulberry St. was the Neapolitan Street; Sicilians were more on Elisabeth Street. So I took a walk to Elisabeth Street and nothing was left there… so following my failing broken plan I went back to Mulberry Street and stepped into Caffé Napoli as suggested by John.

My cappuccuno was very good, and instead of my missing brioche I took a piece of cake “ai frutti di bosco”. Here I met Pedro, from ….San Domingo. All the staff were Hispanic. They do speak some Italian mixed with Spanish. I asked out of curiosity if the place belonged to them. He said that the owner is from Napoli and he showed me the picture of Signora Anna, now an octogenarian, with Diego Armando Maradona. Apparently Diego is an “habitué ” .. well, that’s what Pedro said.

My little Italy experience was coming to an end. After my cappuccino, I sadly made my way to SoHo, where I wanted to do some shopping to alleviate my disappointment. On the map it looked like I should have passed a certain “NoLIta”, which I found out means (North of Little Italy) – even the name is disappearing piece by piece! Confused, I tried to stop some people and ask for SoHo. Whether it was my Italian-London accent, or weather the Chinese people that populated the streets did not understand “SoHo” I do not know! I had to go a block back and ask Pedro, out for his cigarette, for directions to SoHo. I managed to feel home with a person from San Domingo; that’s the closest I could get to Italy in that corner of New York at 10 AM on an ordinary day. 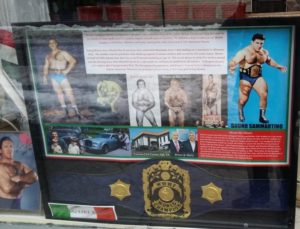 Sad, closed windows accompanied me out of what is left of Little Italy. A poster of Italian immigrants here, a picture of the wrestler Bruno Sanmartino there… “The American Dream for many Italian Americans who believed in his ideals of hand work, sacrifice, family, respect, and all natural training…”

A shop called “Little Italy No1 Gift shop” run by a Chinese family was the last straw for me that day.

I rushed off to visit the other places on my list before the rest of the Big Apple vanished too!