Who is Leoluca Orlando?

In consideration of Palermo’s upcoming mayoral election scheduled for May 6th and 7th, Times of Sicily aims to provide information about candidates seeking this position.  As part of such, today we feature Leoluca Orlando by publishing his curriculum vitae kindly submitted by Leila Orlando. 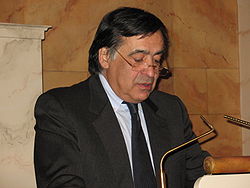 Member of the Italian Parliament

President of the Sicilian Renaissance Institute

Leoluca Orlando was born in Palermo in 1947, is married and has two daughters. A lawyer and Professor of Regional Public Law at the University of Palermo.

He studied and lived for some years in Heidelberg, in the Federal Republic of Germany

He worked as international consultant for OECD in Paris

From 1978 to 1980, as legal advisor to Piersanti Mattarella, President of the Sicilian Region, until he was killed by the Mafia in 1980.

In 1980 he was elected City Councillor for the Christian Democratic Party and in 1985 became Mayor of Palermo. During his five-year administration, Orlando headed a city government made up of movements and parties of the political Left, which constituted a severe break with the political practices of the past. In the same period, which became known as the “Palermo Spring”, he denounced the peril represented by the mafioso economy, the channel through which the Mafia families exercised their power with the complicity of public officials, and promoted a substantial growth of the antimafia movement within the local society.

In 1990 Leoluca Orlando ran as top candidate for the Christian Democratic Party in the elections for the city government and, though boycotted by national leaders of his own party, he was elected with the largest number of votes (71,000) among all candidates. His efforts to renew his party from within met however an ever increasing resistance, and in 1991 he left it and found the Movement for Democracy “La Rete” (“The Network”).

The main aim of the new political movement was to bring moral issues back into Italian politics through the so-called “transversality” (“multipartisanship”), i.e., the participation of all the positive forces of the various political parties in the struggle toward the creation of a more democratic society. As a candidate of this new movement, he was elected to the Sicilian Regional Parliament in 1991 and to the Italian National Parliament in 1992.

In 1993, in the first direct mayoral elections ever held in Italy, he was elected Mayor of Palermo with 75% of the votes, and immediately got under way some reform to banish the economic interest of organized crime from the Municipality. Specifically, he brought to conclusion the process of rescinding all the contracts for the maintenance of public facilities that the City had assigned to companies suspected of belonging to the Mafia families. He had already started this process during his first term of office, but his action had been hampered by the fact that at that time the mayors were subject to the control and the veto power of political forces often conditioned by organized crime.

Moreover, he gave impulse to a new multi-faceted project of civic renewal which, through a variety of programs including cultural and school-based initiatives for the promotion of a new culture of lawfulness, has effectively contributed to free the citizens from the cultural hegemony of the Mafia in a process which has become known as “The Palermo Renaissance”.

On the mayoral direct elections of November 1997, Orlando was confirmed Mayor of Palermo with 58.57% of the total poll for a second (and last, according to the Italian electoral law) four-year term .

In May 1999 he joined “The Democrats”, a political party founded by Romano Prodi.

In December 2000 he resigned from his office as mayor in order to run for the regional elections of June 2001, where he received about one million votes and was elected member of the Sicilian Parliament and minority leader.

In April 2006 he is elected deputy of the National Parliament.

From October 25th 2006 till April 2008 he has been the President of the parliamentary Commission of the Italian Parliament for regional affairs.

In Mai 2008 he is re-elected deputy of the Italian Parliament.

In June 2009 he is elected deputy of the European Parliament.

November 2009 he is elected vice –President of ELDR party (European Liberal Democratic and Reform) during the Congress in Barcelona.

Honours and awards and commissions

In 1994, for his participation in the German film “Gezählte Tage” (“Just a Few Days”) he was awarded the Fernsehen Film Preis  (Television Film Prize) as the best actor of the film which won the first prize  that year. He has participated in numerous other films abroad, among others, the Film “A Sicilian Odyssey” by Jenna Maria Constantine, which won the first prize at the International Film Festival in New York in 2009.

From June 1998 to January 2001 he was President of the Car-Free Cities Club, the European alliance of the cities that seek to promote a sustainable urban mobility.

In December 1999 he was appointed President of the newly created non profit organization ”The Sicilian Renaissance Institute”.

In April 2000 the group of democratic and liberal parties in the European Parliament awarded him the European Civic Prize “for his struggle against organized crime, and his engagement in favour of the civic renewal of his city”

In May 2000, he was granted the honorary citizenship of the Los Angeles County, in the USA.

In July 2000, at Philadelphia (USA), the American Federation of Teachers conferred on him the Bayard Rustin Human Rights Award “for bringing the freedom of orderly civic society to Palermo, and for sharing the ‘lessons of Palermo’ with citizens and governments in societies that are struggling with similar threats to democracy and human rights”.

… he was conferred the Pushkin Prize 2001 “for his outstanding achievements in the promotion of culture” in St. Petersburg, Russia.

In November 2004 he obtained a degree honoris causa in German philosophy from the University of Trier.

In February 2005 he is awarded of the international prize “G. Pitrè from the International Department of Etnological-History of the University of Palermo

In November 2005 he is awarded from the city of Teramo of the national prize “Paolo Borsellino”.

In 2007 Founding member of ECFR-European Council on Foreign Relations

He is also the author of the following books dealing with politics and his own political commitment:

Arabic edition of the book “Fighting the mafia and renewing Sicilian culture” edited by The Lebanese Foundation for Permanent Civil Peace – Beirut, December 2004.