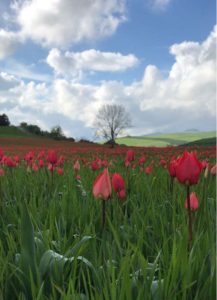 Every year from the middle of March to the end of April a spectacular show of nature happens in a wheat field in the middle of the Madonie mountain range here in Sicily.  Millions of wild tulips spring up from underground in a farmer’s field and start blooming, with colours ranging from light pink to dark red.

While driving along the secondary road that leads to the little village of Blufi, to come round the corner and be confronted with this mass of colour is totally an awesome (in the real sense of the word!) experience. This could be the stuff of an Impressionist painting with the snow-capped mountains in the background. Not even many Sicilians know about it but some have been to visit as we follow the path through the field to take our photographs.

No-one really knows how the tulips (Tulipa Agenensis) got here but they are rare and are now a protected species. Non-native to Sicily and originally from the Middle East, they seem to have naturalised here in this part of the Mediterranean. Now they have propagated into literally thousands so obviously have been here for many years. In some other areas of Sicily they can be found growing in vineyards, olive groves and fields in the mountains as it seems that the bulb thrives at altitude. Every year the farmer ploughs his field making it ready for the sewing of his grain. The bulbs are at least 50 cms. underground so they don’t get damaged and never fail to come up without any problems every Spring. 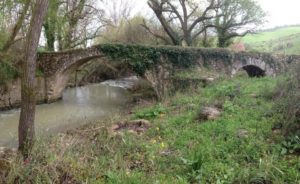 The field where they are is in front of another curious place: the Sanctuary of the Madonna dell’olio (Madonna of the oil). Here there is a source of natural oil that trickles from between the rocks and is said to have miraculous properties. Even today it is used for a variety of skin diseases. A bit further on just past the village of Blufi is a romanic bridge which was actually built during medieval times but still in a very good state of repair today and worth the 800mt. walk down to see it.