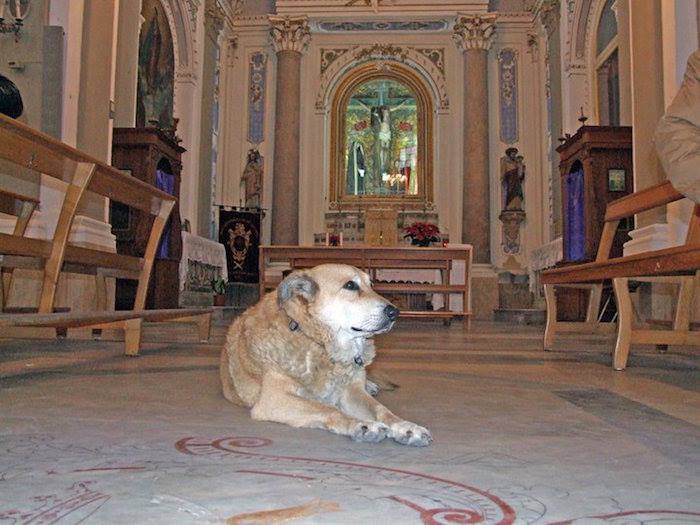 A couple of Summer’s ago, whilst being on The Inspector Montalbano Filming Locations Tour with a friend who was staying with us, we visited the beautiful town of Scicli in South East Sicily. Scicli is one of Sicily’s UNESCO listed Baroque towns and one of my favourites, it is so beautiful with wonderful architecture framed by rocky limestone cliffs and I never need an excuse to visit.

Whilst it is well known as the fictional town “Vigata” in the Inspector Montalbano series it is also famous for another reason.

Knowing that I am a big lover of animals and that we have a rescue dog called Daisy, my guide Christy told me a very special story about a dog called Italo who stole the hearts of Scicli and became Italy’s darling.

Italo was a dog without a master who used to stroll around the town hall square. Some say that he wandered into town after the death of his owner. At first no one noticed him but then the locals started to notice that the dog entered the church to attend mass and was always present for funerals and weddings. In a short time he became the dog owned by everyone and the mascot of the city.

It all started when Scicli’s four legged friend arrived in 2009. He was a crossbreed similar to a honey coloured Labrador, he arrived hungry and dirty. The people of Scicli fell in love with this sweet stray and thereafter he never went hungry.

As well as attending church, he joined in with parades and festivals. He would wait for children to finish school and then walk them home.

Although everyone was Italo’s friend he did have one special friend whom he used to meet at a bar every morning, tragedy hit the town when this young man died prematurely. Italo went to church and kept vigil laying by the coffin until the day of his young friends funeral.

He was also a local hero, one evening a waitress finishing her late night shift was approached by a drunken man, Italo was nearby and chased the aggressor away and after that every night at 2am he would wait for her after work to walk her home.

Tourists visiting Scicli would be greeted by Italo and he would escort them around the places familiar in the Inspector Montalbano series.

One day he was hit by a car and the driver failed to stop, although he was unharmed there was a national outcry and through the wonders of social media, the lady driver out of guilt gave herself up.

After this the Mayor of Scicli prepared a kennel in the square next to the town hall and Italo was made an honoury citizen of Scicli.

He was loved by everyone until the day of his death which grieved the whole town. 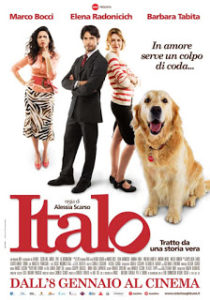 Italo is buried in Scicli’s cemetery and his memory still lives on.

An exhibition was arranged after his death by artists that painted portraits of him.

You can visit Italo’s favourite bar “italo BARocco”, there is a large beautiful photo of Italo on the wall outside and inside a gallery of photos and newspaper cuttings.

In 2014 a film was made called “Italo” where his life was depicted in this Italian romantic comedy. Italo was played by an eight year old golden retriever called Tomak and the film was shown at the 60th Taormina Film Festival. The movie was filmed in Scicli and its surrounding area.

We have our own little celebrity in Daisy, she is much loved by everyone in our home town of Giardini Naxos and Taormina where she has her favourite bars and restaurants. She was even once offered a job by a fisherman digging holes on the beach so he could moor his boat and maybe one day she will tell you the story of when she followed in the footsteps of Italo and met the delightful character Catarella from Inspector Montalbano.

Sarah Kearneyhttp://www.whitealmond-privatesicily.blogspot.co.uk
I was born in London UK and spent fifteen years in the banking industry before making a move into the world of weddings and events. Fifteen years ago I visited Sicily for the first time after reading an article in a magazine and was immediately seduced by this magical island and its people. Two years later my husband and I bought our Sicilian home in Giardini Naxos, got adopted by many Sicilian families, acquired a Sicilian big brother, made an amazing network of ex-pat friends and became addicted to cannoli. My love for Sicily inspired me to write a Blog called White Almond Sicily sharing travel advice, food tips and living life “The Sicilian Way” writing in a fun and visual way using my own photos to encourage more visitors to the island. I now divide my time between London and Sicily with my husband and our rescue dog Daisy, who embarks on a UK to Sicily road trip twice a year. Daisy loves her Sicilian life and has explored Mount Etna in a defender Jeep, enjoys wine tasting trips, been on the set of Inspector Montalbano, had her photo taken with the character Caterella and is quite the celebrity in Taormina.